I started in music.  I played drums for nameless bands.  Seemingly forever.  But a "fun" forever.  Eventually, after a day of music fits and tantrums, I thought of an idea - "Let's create characters like the Lil' Homies but instead of 'Homies', they'll have Mullets.  I'll call them Mullet Heads!"  That's a good abbreviated and condensed way of describing how I plunged into this industry.  Music has always been my first love.  The arts.  The arts are my love.  But music permeates.  I still play, just not on stage.
I remember heading out to Indio a decade ago.  Even before that, I remember Pearl Jamplaying the Polo Grounds.  It was an "F" You concert, flipping the bird to Ticket Master.  Pearl Jam escaped the long Ticket Master grasp and headed beyond their reach - thus the Polo Fields in Indio.  That show(s) proved that concerts worked at that location.  Cut a few years later (post Lollapalooza culture festival explosion), Goldenvoice - the genius micro promoter outfit which had a hand in every punk rock show extending from San Diego to Santa Barbara from the mid 80's on - held a concert in the desert.  It was amazing.  My friends and I had a great time.  For the next few years we named the show "Rock and Roll High School Reunion".  It seemed that every musician that I had met along the way (and vice versa) was at the show.  It was great.  It still is great.  Bigger.
All things being said, that feeling and those people were my family.  Those were amazing times.  That's why I jumped at the chance to have my own micro product offering in the famous Coachella Boutique.  A sure shot from the mainstage to the back of the venue.  Couldn't miss it if you tried.
I knew that Joe Ledbetter would be the perfect fit (no pun intended) for the T-Shirt.  And he is.  Joe's mascot, Mr. Bunny pitches the perfect concert going narrative - a fun time, a little delirious and knocked off the planet.  Brilliant.  I then had the idea to create a map - like the ones at Disneyland.  Although I wanted to use the genius collage and "all things connected" universe as demonstrated by the brilliant Jon Burgerman.  He knocked it out of the park.  The poster is almost 6' wide and printed on archival paper (this one definitely goes up in a frame).  It's a true treasure map, illustrating famous facets of Coachella lore past and future.  Take a real close look.  There are some amazing nuggets that I'm sure a well versed Coachella-ite will recognize.  So that is where we stand.  Unfortunately, both pieces are only available at the show but fortunately, you'll have to go and have the time of your life to have access to them.  Not too bad a predicament. 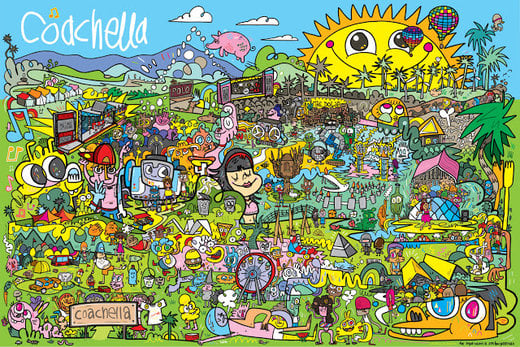