I live in a great part of West Hollywood.  I feel connected to my community, I should, I’ve lived in West Hollywood going on 22 years.  Originally from the suburbs of Laguna Beach I vowed in a praetorian declaration to my mother as a wholly confident 12 year old that I would never live more than 5 miles from the ocean, and if circumstances were such, death would become me.  Shortly after High School I traded in my surf gear for a pair of drumsticks, stricken by Rock N Roll fever I followed my sickness to Los Angeles where a cure waited from the likes of new bands and great venues.   Bye bye beach, hello concrete.  I spent the better part of my 20’s slinging drum cases in back of trucks, in vans, sweating it out at the Roxy, Troubadour, Whisky, Viper Room, Opium Den, backyards, living rooms, dumps, dives and dips.  Below me was Melrose Avenue; a pulse pounding femoral-like raging rapids, host to punkers, rockers, head bangers, metal heads, cool kids, hip hop kids, graffiti kids (CBS), skaters, BMX’ers, stoners, Hollywood stars, lawyers, agents, Producers, and everything in between.  Down the block, maybe two streets, is Fairfax Avenue. It’s three landmark anchors; Canters (including the Kibitz Room), Damiano’s (Mr. Pizza) and Club Largo.  Nothing more than those spots.  The rest of the shops were bakeries, mattress stores, convalescent goods and the like.  Fairfax is an old Jewish community.  Tons of character, tons of history and Canters was/is its shining jewel.  Canter’s had the Kibitz Room – a rock n’ roll deviant’s lair.   Guns N Roses, the Chili Peppers – pretty much every single Hollywood Band soaked the crap carpet and Formica tiles in the Kibitz Room which much glee and Holden Caulfield like pernicious gaiety.  Kibitz was my hang.  I loved it.  The crappy bands, the cheap beer, the street scene, it was the best!  A rock n roll losers club that felt more family like than the ones you share blood with.  Across the street was Mr. Pizza, aka Damiano’s.  I went through a spell where I ate Damiano’s every night after Band Practice.  Not a bad place if you could avoid the cockroaches.  Best garlic bread and calzone I’ve ever had.  There are some great Homeric like stories of Jane’s Addiction and the Red Hot Chili Peppers playing “decadence” back in the darkened booths, (stuck together by duct tape), in the arm pit corners of Damiano’s.  I miss that place.  Up the Street from Damiano’s is Largo.  Finnegan, a great Irish music man/bar man had a polished pool of talented friends.  Walk in there one night and Paul McCartney is doing an acoustic set with a piano and guitar, rattling off Beatle hits by the bushels.  Another night, Colin Hay from Men At Work bending brains with some very brilliant melodic performances.  Another night, it’s Bono who came to sing with Finnegan.  Another night, Fiona Apple and a piano, sulking forlorn adoration, contempt and sultry seductiveness.   Three very special places, a Rock N Roll haven, now a Street Wear haven.  Times have changed.  The neighborhood is still mine but the times are no longer, adopted by a new Fairfax.

If you move up the street a few blocks towards Sunset Blvd you have the Original “Nightmare On Elm Street” house (the ones that are in the movie) and to the right of that street, Meltdown Comics, El Compadre and Guitar Center.  Being musicians and living with a friend who planned on being a great comic illustrator, we would frequently walk into Meltdown.  It was across the street from the location where it’s been for the last decade plus.  The owner had that typical Comic Book storeowner personality, like the guy from the Simpsons, except this dude was Chilean, said “dude” a ton, and was really into Danzig.  He had a cabinet of old Star Wars toys.  My friend and I, being big fans as kids would ask him to pull these figures out so we can check.  We were in full nostalgia insulin overload – peeking out on time machine travel to our 8 year old selves!  My first bout with nostalgia.  He would reluctantly pull some Star Wars figures out, much like a jeweler careful and artfully removing diamonds and precious chains from locked glass cases.  We would look, geek out, maybe buy some sort of trinket and return back in a couple days.  Musicians were/are big on pop culture.  Too broke to buy anything of great importance but with enough couch scratch you can decorate a small rented room with odds and ends, and odd oddities without ends.  Toys fit this description.  It was a way back to familiarity.  Through the years we got to know this dude.  His name is Gaston.  He was in the neighborhood, we saw him all the time, he knew Lazy and Joey from Danzig, we knew them, we liked pop culture, he did too – we had things in common.  When I had the big idea for Mullet Heads back when (my hair had color, I was 175 pounds, and I still played drums), Gaston was one of the first persons that said “Dude, that’s brilliant!  Do it!”  All in a very subtle Chilean accent.  Then he would giggle maniacally.   I ended up doing it, came back to his shop a year later with a box of Mullet Heads and said “Dude, will you buy some?”  He replied, “Dude!  I can’t believe you did it!”  At that point I thought “Oh, sh*t, does that mean he’s thinking I’m stupid for doing it and he would never buy any?  If I can’t sell these to him, and I know him, I’m screwed.”  After a beat or two he said “How Much?”  I said “$3.50.”  He smiled, laughed maniacally, and said, “Sure, no problem, these are brilliant!” Gaston and Meltdown were the first store to EVER buy anything I ever created (toy wise).  He gave me the confidence to do this.  He’s been a good friend; he gives a ton to the Industry and Community and is hardly thanked for his commitments and contributions.  Gaston was the first adopter in the Art Toy movement, the first to have any Michael Lau figures.  He had screen printers in his attic, sculptors in his basement.  Meltdown was a laboratory of cool weirdness.  He was the first to turn the back of his store into an art gallery and have group shows (outside of Cannibal Flowers).  Beyond the Comics and Toys, he’s been an incubator for great comics and writers, as well as great up and coming comic book illustrators.  I’ve met Samuel L. Jackson, Robin Williams, Jay and Silent Bob, Guillermo Del Toro, and pretty much every famous comic you can think of at Meltdown. I was in Meltdown one day and Gaston said he had to bounce for a meeting.  A guy walked up behind me, very familiar voice – “Hey!  Gaston!  My boy!” – Samuel L. Jackson.  Another time I was visiting his brother Francisco who said “Hang Tight, a good comic is rolling through in a second, he’s going to do some standup in the back” – Louis C.K.  Gaston, Francisco and Meltdown have been my personal neighbors for double decades.  I love them, I love their store, I love their contributions and I’m thankful for their support.  Meltdown is literally the first store to ever buy anything I created on the toy front, and look now, we’re in over 10k doors worldwide.  Thank you Gaston!  Thank you Francisco!  I love you guys!  Forever familia.  I’m heartbroke to hear the news that Meltdown is closing.  It's been a continuous thread and influence in our neighborhood and in my life.  It truly breaks my heart but I know the Meltdown crew are brilliant and only HUGE things wait in the wings ahead.

One of the TLS Pop Ups we did at Meltdown.  The Transformers graphics filled their whole front windows (west side of Sunset Blvd.) 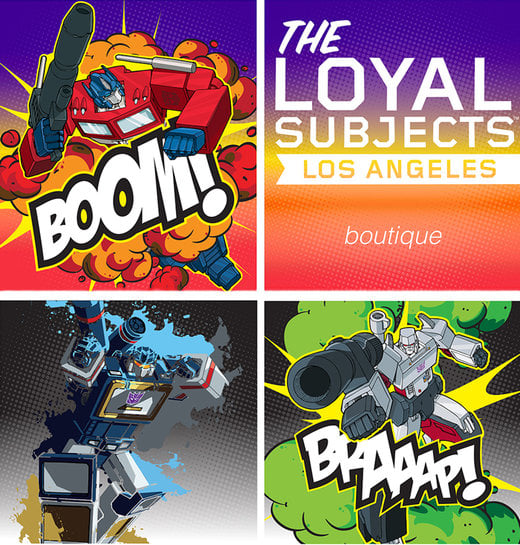