Today's theme; TIME TRAVEL!  Back to the past but without Doc, a Dolrean, Huey Lewis and a nice puffy down vest.  This time machine will click us back to January 5th, 2013, Amsterdam, Holland.  Our vehicle?  This mighty Blog field that I type letters into.

Scratch, that sounds like a Dickens intro.  Let's go less poetic and more visceral.   It was a cold day but nothing a few brave kids from Southern California couldn't weather.  So we did.  We marched on until we found the warm amber glows of Amsterdam's Outland Designer Toys!   There were people waiting, lots of smiles, loads of anticipation and a 10" tall celebrity known as the "Spaced Out Bunny".  And of course, the Bunny's Gepeto, Joe Ledbetter.  Our good friends from Minty Fresh were the sellers of this swirling eyed, stogey toking hare.  Minty Fresh Joel and his lovely lady proved to be gracious and generous hosts to us pilfering travelers.  We felt fortunate to be breaking bread, sharing some great Dutch traditions, and forging friendships with our supporters and hosts who until then we had not met.  The week was a continuum of first time meets although thousands of conversations had already been passed back and forth.  We met Jeffrey and Selim from Toykio, finally!  Some cool dudes with great taste and inviting perspectives.  We met Jerome from Outland for the first time.  What a great dude and what a great store!  Firsts upon firsts and my first time ever in Amsterdam.  I have a feeling Walt Disney walked this historic port inlet judging by the layout and styles comprising the fairey-tale-esque arcadiam of Disney's castle and keep.  Sure looks like Amsterdam to me.

We had a great time riding scooters against the frost bitten air, winding our way up towering 300 year old windmills, sitting down sipping frost off of pure genuine Heineken, perousing swans in near by parks, sifting through canons of genius Rembrandt portraits and of course, most importantly, launching the Spaced Out Bunny to the world at large.  Only 99 pieces were available and they were gone in minutes.  A great crowd packed Outland.  Joe and his Bunny stood center stage.  People showed up from other countries, some had tattoos of Joe's characters.  It was a great happening, a great vibe and a great kick off for this coming Chaos Bunny palooza.

Thank you to all who participated and the fantastic support.  Special thanks goes to Giorgia. 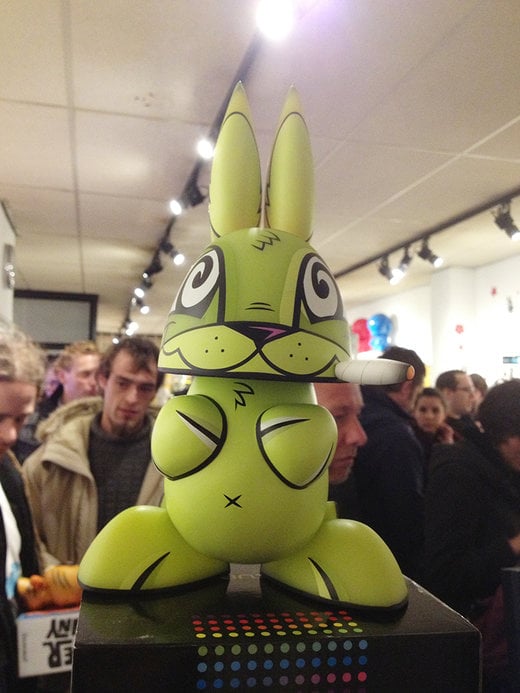 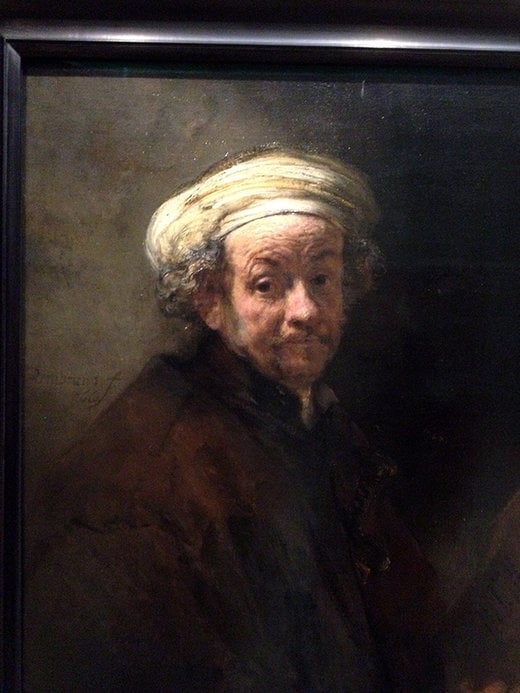 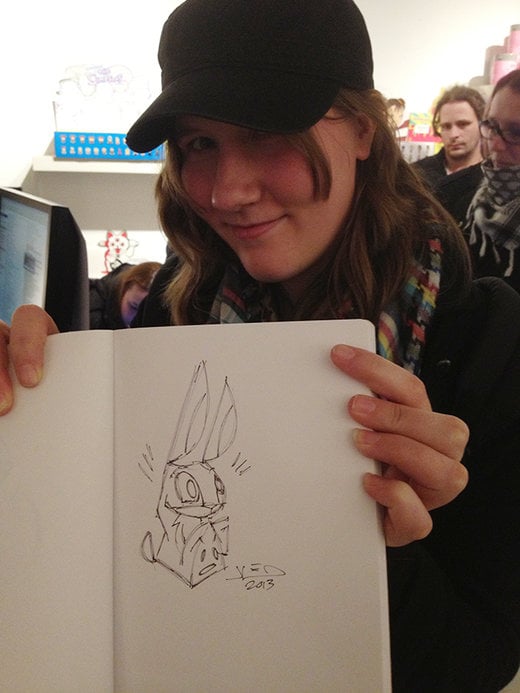 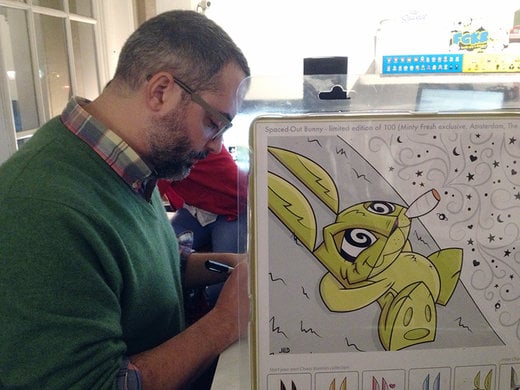 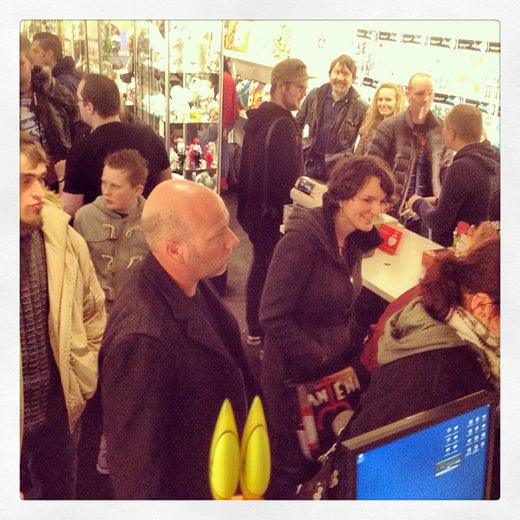 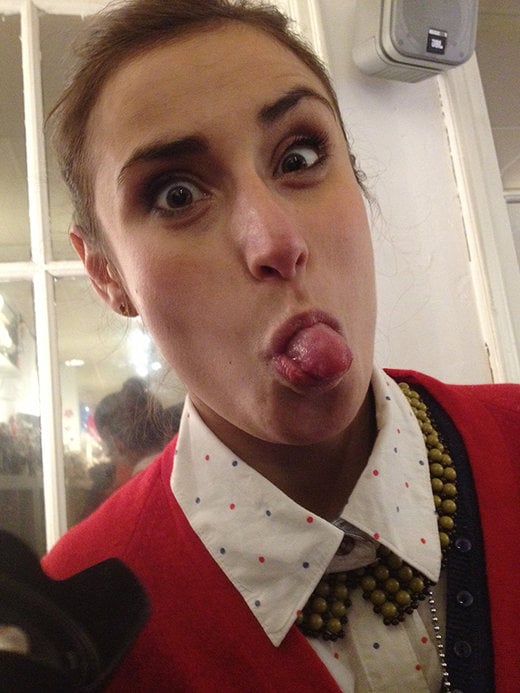 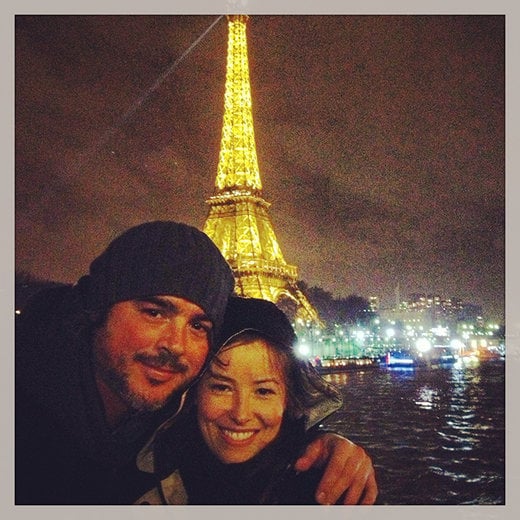 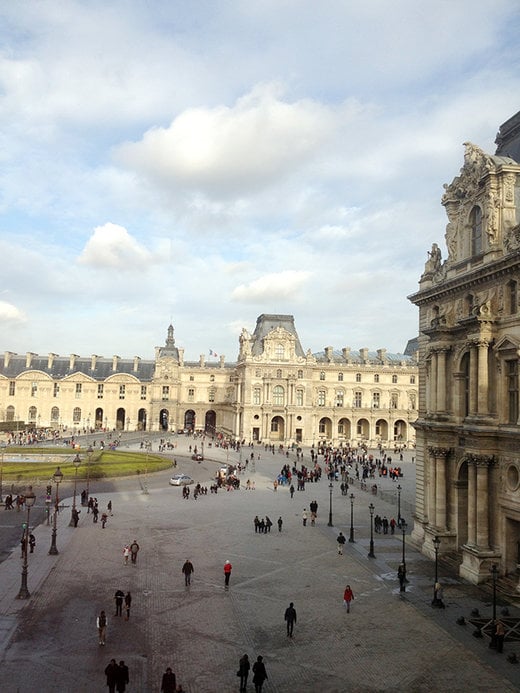